Some people in Jackson travel by the Grand River every day and never give it a thought. Other people look at the Grand River flowing through Jackson on its 220-mile journey to Lake Michigan, and see its beauty and the great asset that it is or could be.

The last Ice Age ended 13,000 years ago leaving behind the rivers and lakes of Michigan.  Before the 1800s, Indians and a few stray Frenchmen were the only people to roam the land we now call Michigan.  The Potawatomie Indians lived in the southwest part of Michigan and called the Grand River “Washtenong-sepe”.  After the War of 1812 the new “Northwest Passage” of the United States was opening for settlers.  Michigan was a territory with thoughts of becoming a state. A New Yorker Horace Blackman heard there was free land west of Ann Arbor soon to be opened for settlers.  On June 29, 1829, he along with Alex Laverty and guide Pe-wy-tum traveled to an area where twelve Indian trails crossed the Grand River.  A marker at Jackson Street and Trail Street marks the spot where Blackman wanted to homestead. 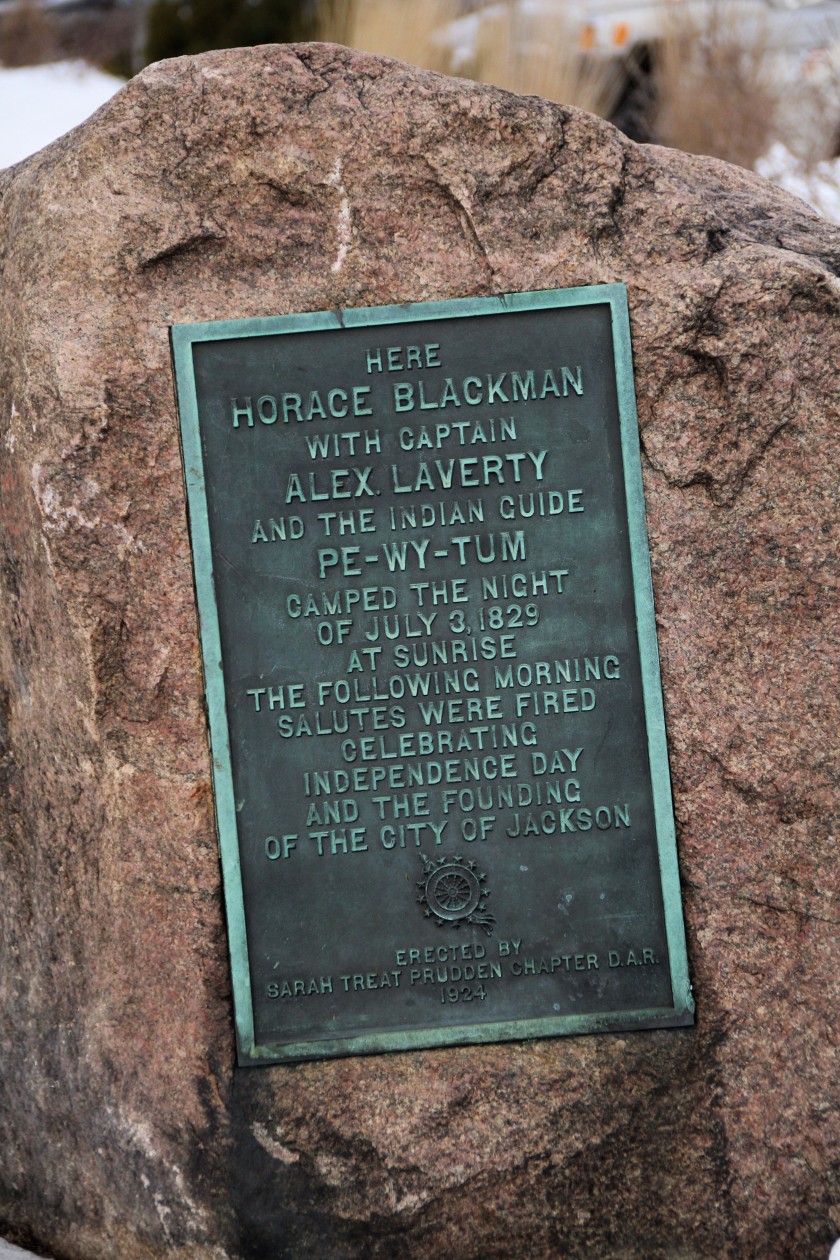 Between 1829 and 1900, Jackson became a major industrial city and a major railroad hub. Commercial buildings and industries were built along and over the Grand River.  All of the waste and trash of this “Civilization” was dumped into the Grand River. Businesses believed that the trash and waste they dumped into the river would not be in Jackson long, that it would simply and easily just float on down the river.  By the 1890s citizens of Jackson started complaining about how filthy and smelly the river was.  The citizens started demanding that something be done to clean the river and to take away the awful smell. 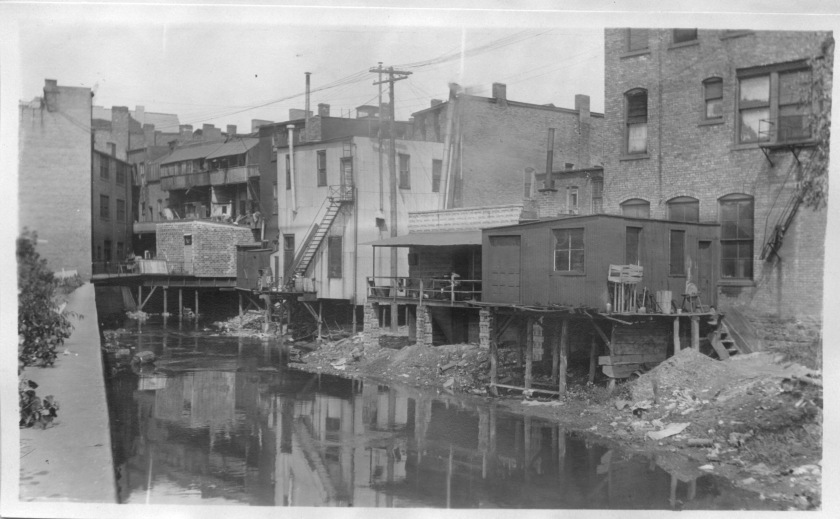 Around 1910, a study was undertaken to solve the problems with the Grand River. In 1914 a plan was developed to get the filthy and stinky water out of Jackson quicker, to appease the citizens.  The plan was to take the oxbows out of the river from North Street to Berry Road. The study believed making that section of river a straight channel would get the dirty river out of Jackson quicker and make everyone happier.  So between 1914 and 1920 all of the river oxbows from North Street and Berry Road were taken out. The river was straight as an arrow thru that stretch, but the water in the downtown Jackson area still stunk, and was a dirty filthy looking mess.

Nobody was happy, not the citizens, not the government, not the businesses, and especially not the visitors to Jackson. A new study was commissioned and another new plan was developed in 1925.  If nothing would get the dirty, filthy, stinking water out of Jackson, well then maybe the solution was to just cover up the river with concrete.  If nobody saw the dirty filthy river then the problem would be solved.  There was only one problem with the new plan.  How would it be financed?  In 1925 the government of Jackson did not have the money to cover the Grand River.  It was not until 1936 that money was found.  In stepped President Roosevelt and the Federal government to save the day.  President Roosevelt and the Works Progress Administration (W.P.A.) had money and they wanted to put Americans to work during the Great Depression.  So the federal government built “The Cap” to cover the river. 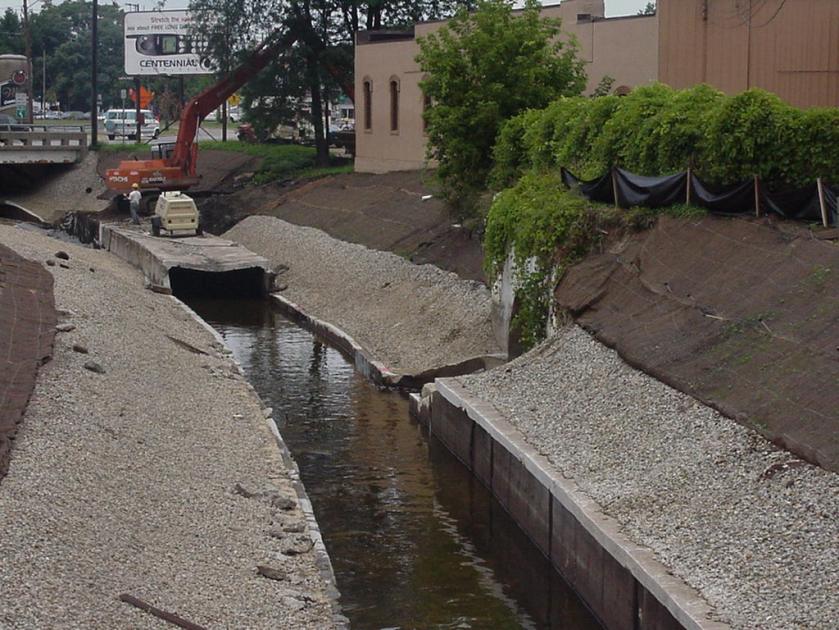 “The Cap” was 2,580-feet long, starting north of Liberty Street (behind now DPW on Water Street) to just south of Louis Glick (where the Toy House is located).  A ten-foot wide and five-feet deep concrete channel was made for the river to flow. Then the area was concreted over to completely hide the river during normal flow times.  The only time the river was visible was during flood times.  The public was appeased; they did not see the filthy river and many families in the Jackson area made money during the Great Depression. 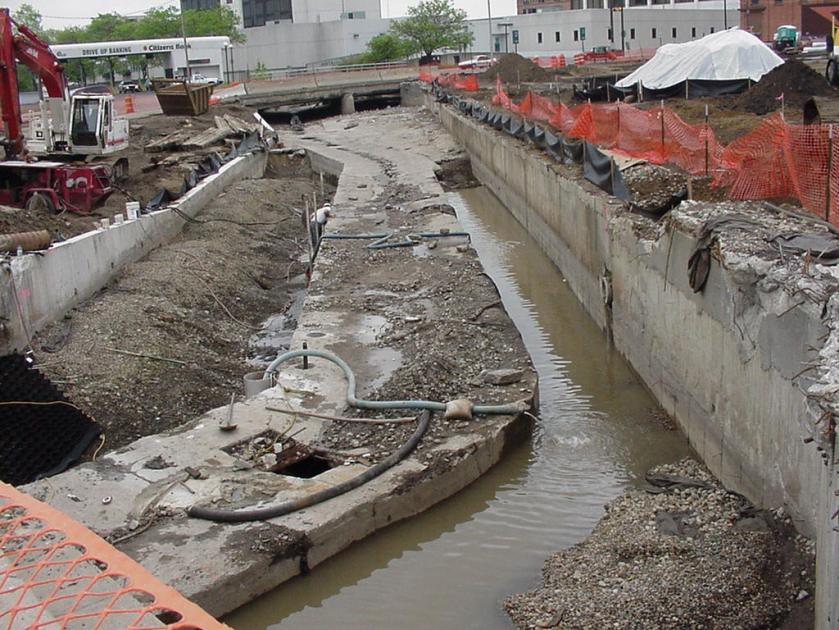 In 1977, the Clean Water Act was enacted and businesses and governments were forced to clean up the river, creeks, and waterways of the United States.  Businesses and Governments in Jackson County were forced to start cleaning the Grand River.  Since 1977 the Grand River has become a lot cleaner. The river today is not as clean as it was before 1829, but the bottom can now be seen and fish are now swimming in the river again. Local business and local governments have made great strides in getting the river cleaner and keeping it clean. 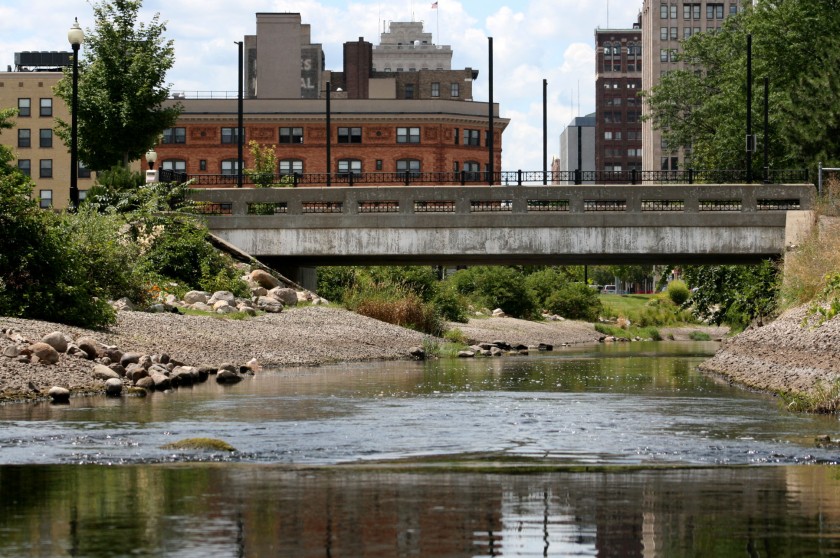 G.R.E.A.T (the Grand River Environmental Action Team) was founded in 1991 to protect and promote the Grand River.  Since 1991, G.R.E.A.T. has had an annual clean-up of the river.  Almost everything imaginable has been pulled out of the river.  The last five years, G.R.E.A.T has been helped by the J.R.O.T.C. at the Career Center.  A record number of 137 people came out in 2013 to clean the Grand River. G.R.E.A.T. along with its board, members, and friends will continue to clean the river, trying to make it a great asset to the citizens of Jackson County. 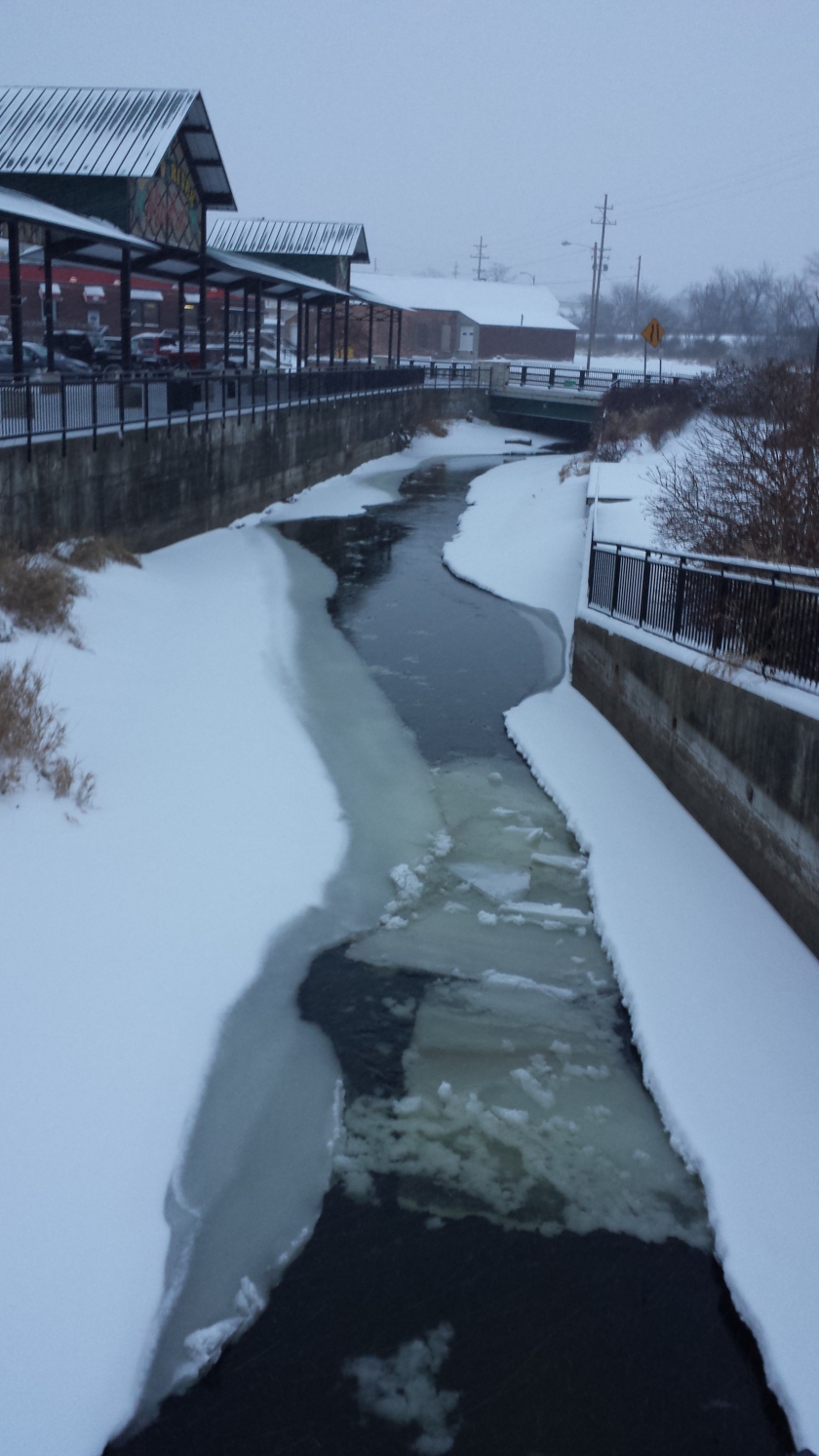 As I experience each new autumn day in Jackson, I’m amazed at how much the sunlight and colors of fall entrance me and engage my attention.  This preternatural connection to nature brings added benefits to my holistic health.  I walk outside much more.  I breathe deeper breaths, smelling the scents of autumn as I breathe in and pushing out stress as I breathe out.  I engage in conversation with local residents.  Every new face is a lovable strangers to me, the true stranger, the outsider, the foreigner.

Time and time again, day after day after day, someone in Jackson blows me away with their kindness.  So often, I sense genuine interest in meeting me — that new person from somewhere else.  On October 7, 2013 I experienced a Jackson moment, for me the new signature Jackson moment.

I attempted to order two coney dogs and a large root beer float from the Cascades Ice Cream Company.  I don’t carry cash these days and I realized with a small, seasonal operation, I might be in for an “unable to pay” surprise.  I asked “do you accept debit or credit cards?”  The response from the pleasant 20-something server was a bright “we don’t, but we’re getting the machine for next year”.  She added, “but you can pay tomorrow or later this weekend.”  With shock I offered this incredulous reply “Well, here’s my card so you know who I am.  By the way, I encourage you to come out at walk the trails at Dahlem.  It’s so beautiful this time of year.”  She replied with a smile, “I went there last year with my son’s class on a field trip!”

Here’s the IOU reminder, which I will bring with me to pay my $8.25 debt today: 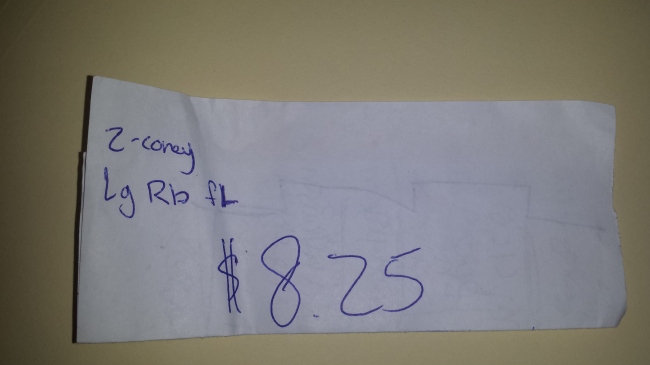 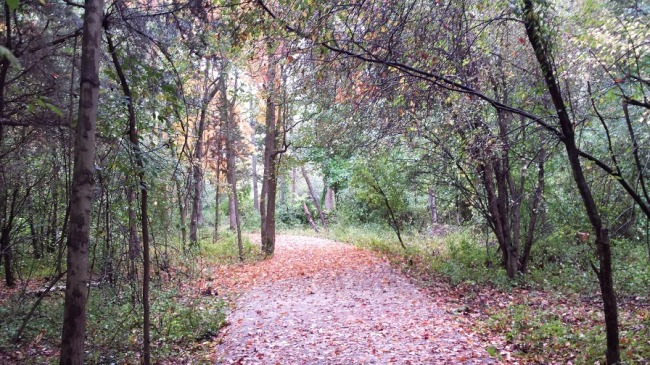 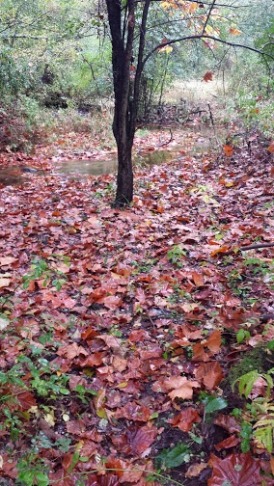 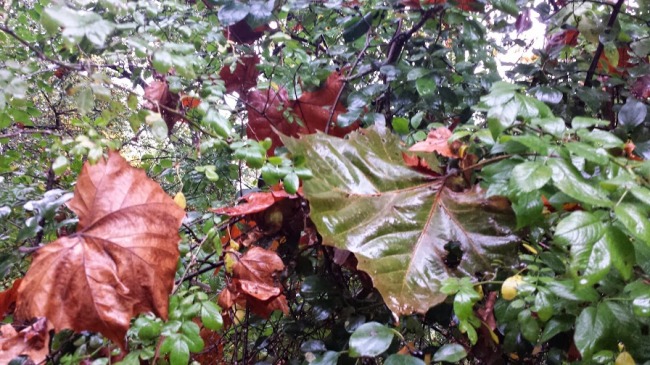 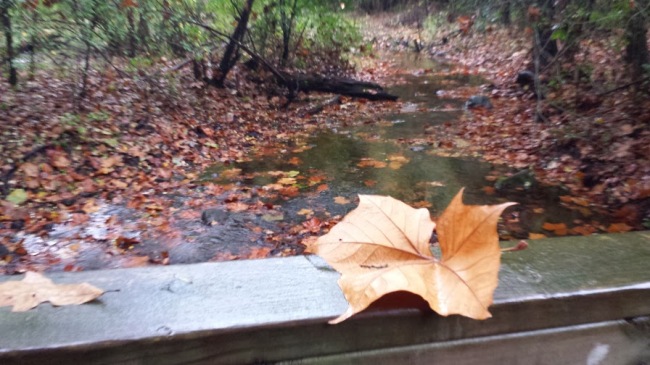 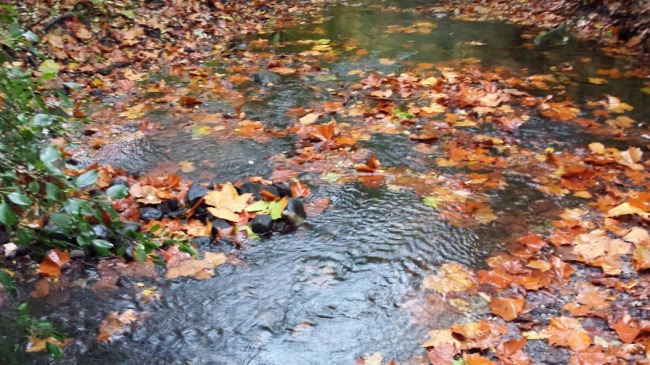 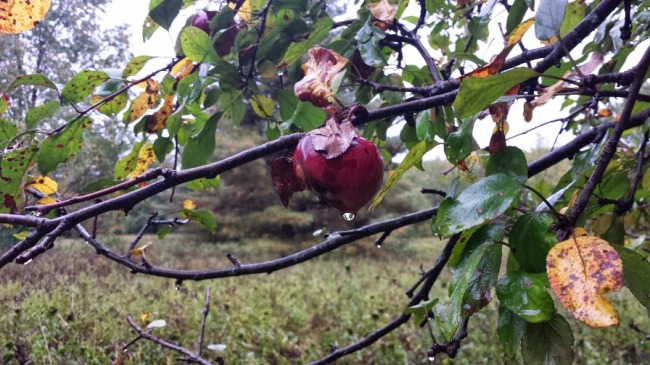 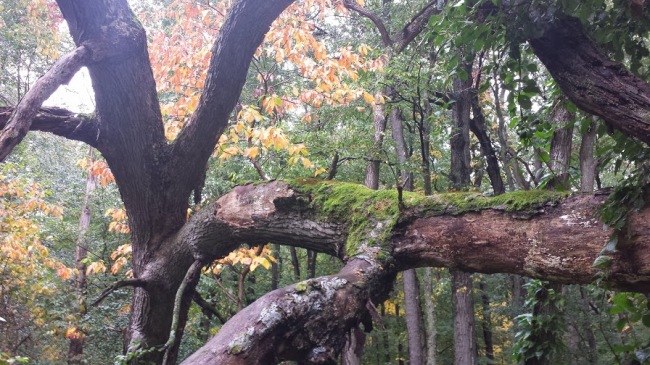 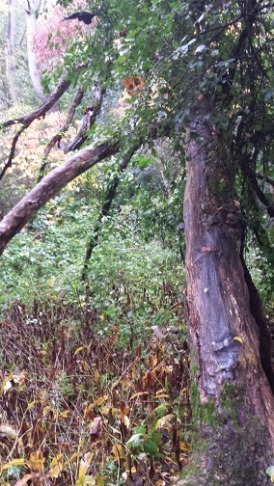 For those of you who enjoy walking outside in downtown Jackson, here are several images for you from October, 2013 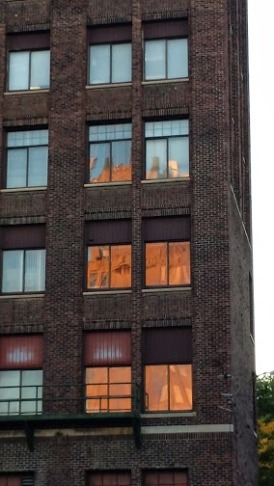 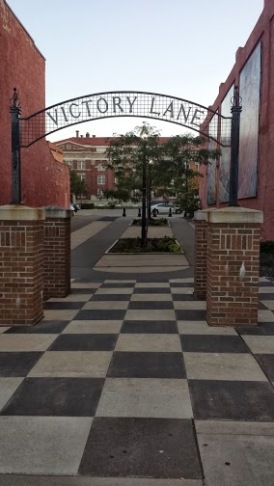 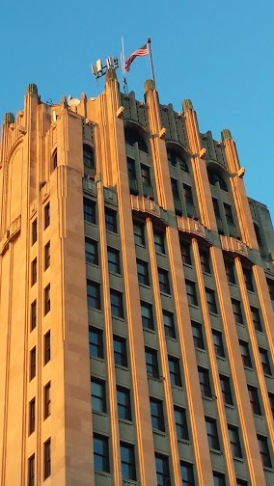 Come walk the trails at Dahlem with me this season,