But recycled art has a special place in my love for art.  Especially recycled metals art.  In Tampa, FL and Fairfield, CA, I have benefited from the work of talented artists Steven Taylor and Phillip Glashoff.  Gilbert R. an artist in Vacaville, CA has created some of the most incredible recycled art I have ever seen, I’ll never forget the person or his art.

Steampunk Eddie and his Clock at Grand River Marketplace

Ed Thayer, the artist known as Steampunk Eddie, creates 3-D artwork that is mostly from recycled parts, often whimsical, and always functional. One of his larger and more public art works is the vintage-looking clock on display at the Grand River Marketplace. Called “A Matter of Time,” it features a large clock face resting on a base that is copper-covered and clear-coated with various decorative pieces.  The clock hands which swing wildly and a steadily-moving pendulum are powered by a microwave motor and a rotisserie motor.

The Steampunk aesthetic has been around for a while but right now it is hot. It’s an artistic style that brings together fashions and technology of the 19th century Victorian era. For Ed, it’s an art form that is interesting and fun, that creates something cool or functional out of junk, that is usable, and that you can’t help but look at. That’s the wow factor he always goes for.

Ed gathers gears, motors, metal and wood scraps, discarded things. Then he lets them speak to him until he gets an idea and starts assembling. He says an artwork seems to come together by itself. He looks at a piece of what we might call junk, sees something cool in it that sparks an idea and one thing leads to another. He says, “It’s kind of crazy, but it’s cool.” He doesn’t usually end up creating what he first envisioned and that’s part of the fun.

Steampunk art is relatively new for Ed. He had a long and successful career as an airbrush artist. You’d recognize his work when you see the flameouts alongside the tow trucks from Phelps or Jimmy’s. He’s worked for Ted Nugent and Roger Penske and even airbrushed the tour bus for the cast of Jersey Shore.  But when he discovered Steampunk a year ago, it combined all the skills he had into one art. He says, “This is so me. I can weld. I’m mechanically-inclined. I worked on custom-built cars. I was always an artist.” Now he’s the godfather of Steampunk in the area. And he adds, “The best is yet to come.” Find Steampunk Eddie on Facebook. 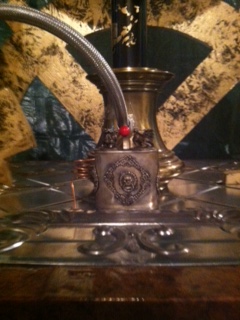